The late Leslie Russell taught Peter Austin the Dieri language in 1974 when they met in Maree in northern South Australia. Leslie was a retired cattle station worker and was well known as a singer and teller of stories. He had a very clear voice and the right level of patience to help a beginner, Peter, learn his language (Leslie also spoke Wangkangurru from the north side of Lake Eyre). Sadly, he passed away in 1975.

One of the first sentences Leslie taught Peter was the following:

It means: ‘You came from far away to hear Dieri here’.

Here are what the words mean:

ngaralha consists of ngara which means ‘to hear, to listen’ and the ending -lha which means ‘in order to …’ when an action is performed by the same person who performs the first action. Here, we have ‘you came from far away in order (for you) to hear Dieri’. We don’t have to mention the second ‘you’ because -lha tells us it is the same person doing both actions of coming and hearing

Why not try using this sentence yourself when you meet someone who is interested in learning to speak Dieri?

Note: The title of this blog post means ‘Listen to Dieri language’ — ngaramayi is made up of ngara ‘to hear, to listen’ and the ending -mayi which indicates a command (‘you do it!’).

In 1974 the late Leslie Russell sang and explained a number of songs in the Dieri language for Peter Austin. These songs are associated with Cooper Creek in Dieri country to the east of Lake Eyre. Leslie referred to this area as kudnarri, so the songs are called kudnarri wima where wima means ‘song, ceremony’. They are general songs that can be performed any time and can be listened to by anyone.

Each song consists of four lines (which may be repeated), and each line is made up of two words, with each word consisting of two syllables. This means that for some words the endings we would normally use in speaking are missing in the song (so all verbs consist of just the root, without any of the usual endings). Each song is about some event or happening that Leslie witnessed, and usually they evoke one or more images, rather than describing a scene in detail.

One of the songs is about wirlu the bird called ‘curlew’ (its full English name is Bush Stone Curlew or Bush Thick-knee, and its scientific name is Burhinus grallarius).

Here are the words of the song:

and it is made up of these words:

ngathu ‘I’ (used when I perform an action)

ngara ‘hear’ (this is the root of the verb which normally occurs as ngara-rna ‘to hear’ or ngara-yi ‘is hearing, is listening’

This song evokes the beautiful image of Leslie listening to the curlew calling out as it wades in the water of Cooper Creek. When speaking Dieri, rather than singing, we would say:

Here is a short video of curlews making their distinctive calls:

For the Dieri Aboriginal Corporation ILS project we are working on developing several bilingual dictionaries of the Dieri language. We expect that there will be a number of dictionaries that come out of the project, meant for different users and different uses.

Peter Austin has been working on creating a reference dictionary that will be a major resource for teachers and language learners and will include lots of information about words, meanings, cultural context and use and will include examples of the words taken from his recordings made in the 1970s, along with material from present-day speakers. He has created a draft of the dictionary that has three parts:

The Dieri-English and Categories sections contain illustrations for plants, animals, artefacts and other words so that readers can gain more information about a particular itemn. Here is one page from the list of words beginning with ka- that shows what the dictionary might end up looking like. 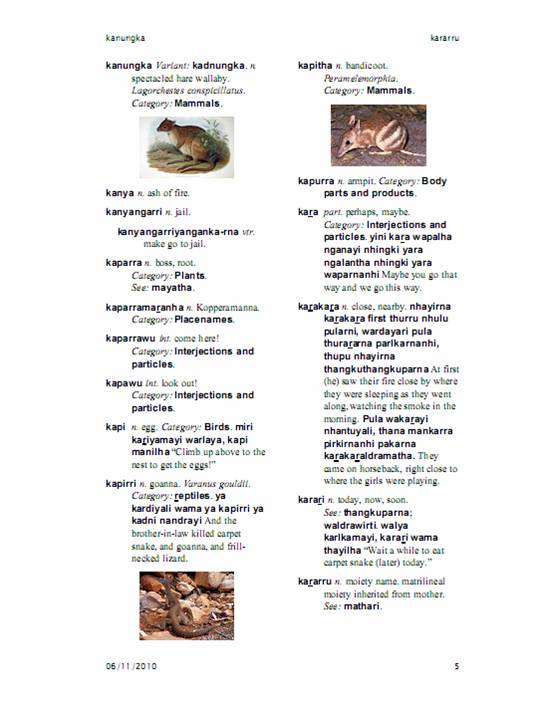 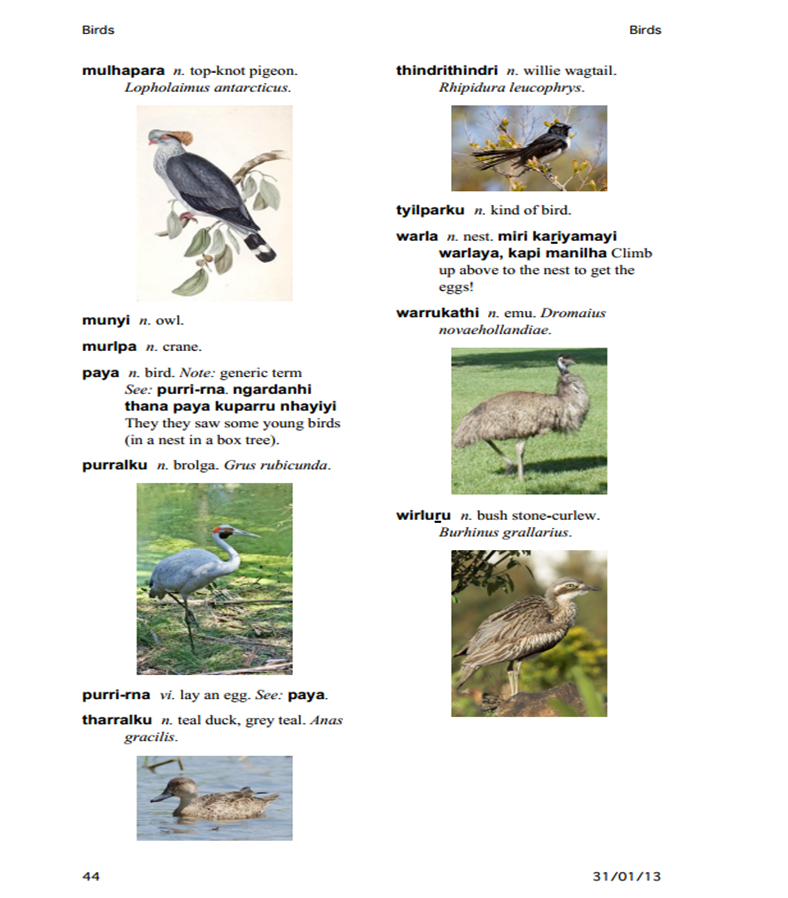 We also hope in the future to make a web-based dictionary that includes sounds so that people can hear the words pronounced by a native speaker and then model their pronunciation on them.

Note: The title for this post consists of yawarra meaning ‘language’, the ending ya meaning ‘for, belonging to’ (called the ‘possessive ending’) and pipa meaning ‘book’ (and originally from the English word ‘paper’). Together this means ‘books for language’ 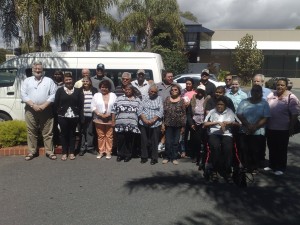 On 2nd and 3rd of February a group of Dieri Aboriginal Corporation members met at the Arkaba Hotel in Adelaide for a Dieri language revitalisation workshop. A total of 30 people attended the two-day workshop, coming from Maree, Lyndhurst, Port Augusta, Whyalla and Broken Hill. The workshop was facilitated by Peter Austin (who flew in from Canberra) and Greg Wilson. Rob Amery and Mary-Anne Gale from Adelaide University came along for one session and talked about language activities being carried out elsewhere in South Australia, especially by the Kaurna and Ngarrindjeri groups, as well as the Cert IV to be offered through TAFE SA called Learning and Teaching an Endangered Aboriginal Language.

A number of language focused activities were carried out over the two days, along with a discussion of goals and plans for the Dieri ILS project. We looked at how to write words for parts of the body, and this led to a discussion about spelling for Dieri, as well as how to make new words by combining together words and pieces of words. So ‘mouth’ is marna and ‘tooth’ is marna thandra, ‘eye’ is milki and ‘eyeball’ is milki thandra, ‘knee’ is pantya and ‘kneecap’ is pantya thandra. By itself thandra means ‘fruit’.

On Saturday afternoon and Sunday morning we translated the chorus of a song by Chris Dodd, who writes and sings country and western music (he won an award at the Tamworth Country Music Festival in 2011), called ‘The Cooper’s coming down’. Here is how the chorus turned out:

Here is what it means in English:

We talked about some of the grammar in this song, like the ending nhi which means ‘in, at, on’, as in mithanhi ‘in the country’, or nguranhi ‘at the camp’ or warlinhi ‘in the house’. We also saw the ending rni which is used to indicate ‘possession, belonging to’, as in ngayanarni mitha ‘our country’ or yularni ngura ‘your (two’s) camp’ (remember from the last blog post that Dieri has three words for ‘you’ depending on how many people we are talking about). 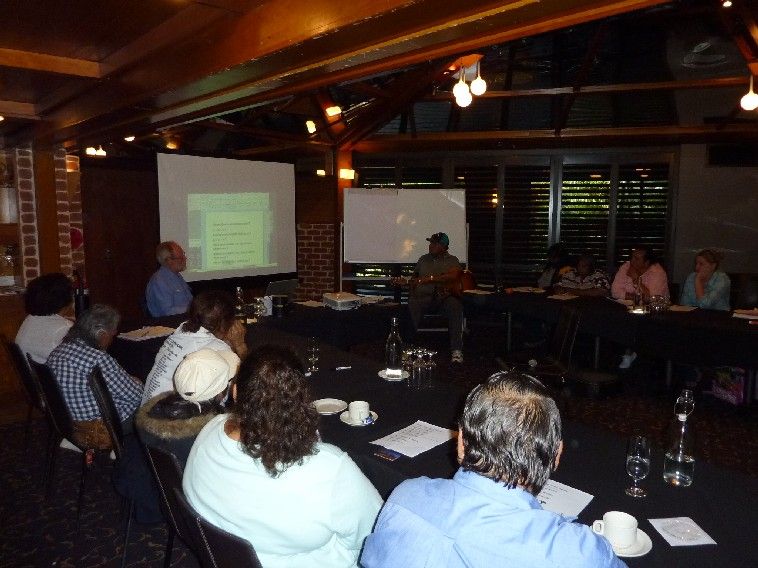 On Sunday Greg borrowed a guitar and we were able to record the whole group singing the new Dieri song, as well as two songs Greg had translated with the Port Augusta mob last year, namely ‘Heads, shoulders, knees and toes’ and ‘Old MacDonald’s farm’. Everyone had a great time joining in with the singing.

The next language workshop will be in Port Augusta towards the end of March.

Note: The title of this blog post means ‘We all talked to each other’ and it is made up of ngayani ‘we all (not including you)’, yathayatharna ‘talk together’, based on the verb yatharna ‘to talk, to speak’, and warayi ‘did’, indicating an action done in the recent past.

Welcome to the Ngayana Dieri Yawarra Yathayilha blog. This blog is dedicated to supporting the Dieri language that belongs to the east of Lake Eyre in the far north of South Australia.

The name of the blog is made up of four words in the Dieri language:

Ngayana means ‘we all including you’

This is a sentence in the Dieri language and is the way we refer to the activities now going on to support and spread Dieri. You can also use it to mean ‘Let’s all speak Dieri language’.

The title of this particular blog post is a greeting in Dieri — it means ‘how are you?’. It is made up of:

yura means ‘you all’

On this blog we will be presenting news and stories about Dieri language and our activities.